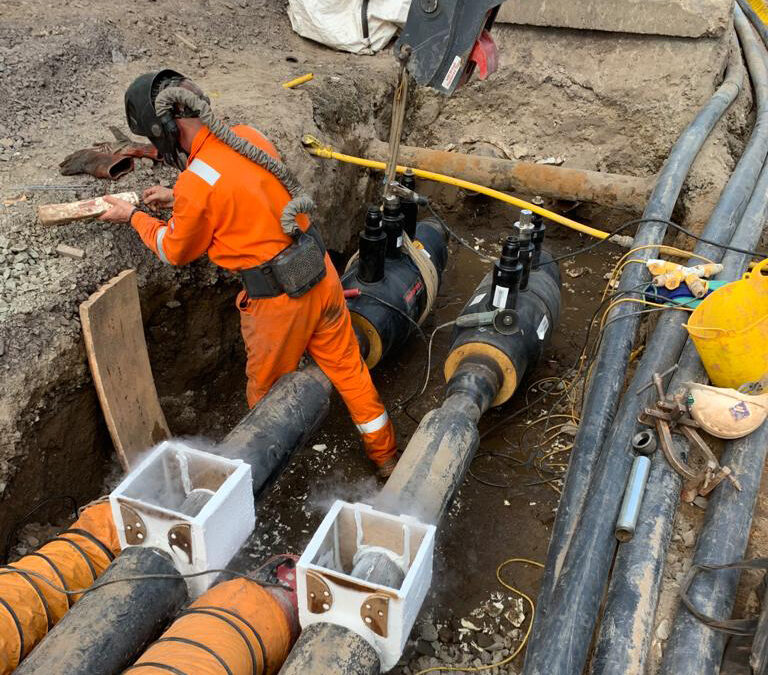 isoplus were pleased to be appointed as the district heating specialist for the current Glasgow University Campus Extension Project. This required the supply and installation of 800 metres of our series 2 ø219/355 pre-insulated pipework, complete with our widely recommended fusion welded joints.

One of the challenges was to connect our newly installed network to a previously installed pipework which had been terminated using standard uninsulated butterfly valves. These valves had been left for some 8 years uninsulated and submerged in water, so, clearly, they needed replacing at the time of connection.

The challenge was that the previous network had been designed, installed and made operational without local isolation valves. In order to connect to the existing mains and remove the now badly corroded butterfly valves would mean a drain down of the existing network. This would necessitate a total shutdown of the campus and draining down of the system.

Isoplus designed a solution and carried out a cryogenic freeze of the existing network. Cryogenic freezing is a type of freezing which requires extremely low temperatures, generally below -150 Celsius. It is utilised to freeze the circulation water within the network over a small area thus forming an ice plug. The solution prevented the discharge of approx. 46,000 litres of treated water whilst we installed our series 2 ø219/355 pre-insulated valves.

This timely and economical solution mitigated interruption to our customer and enabled the university to operate as normal. The cryogenic ice plugs were formed in matter of hours, new valves were inserted and commissioned once the freeze had been successfully established. The ice plugs were then left to thaw naturally allowing the system to return to its original state.

You can read more about the project here!