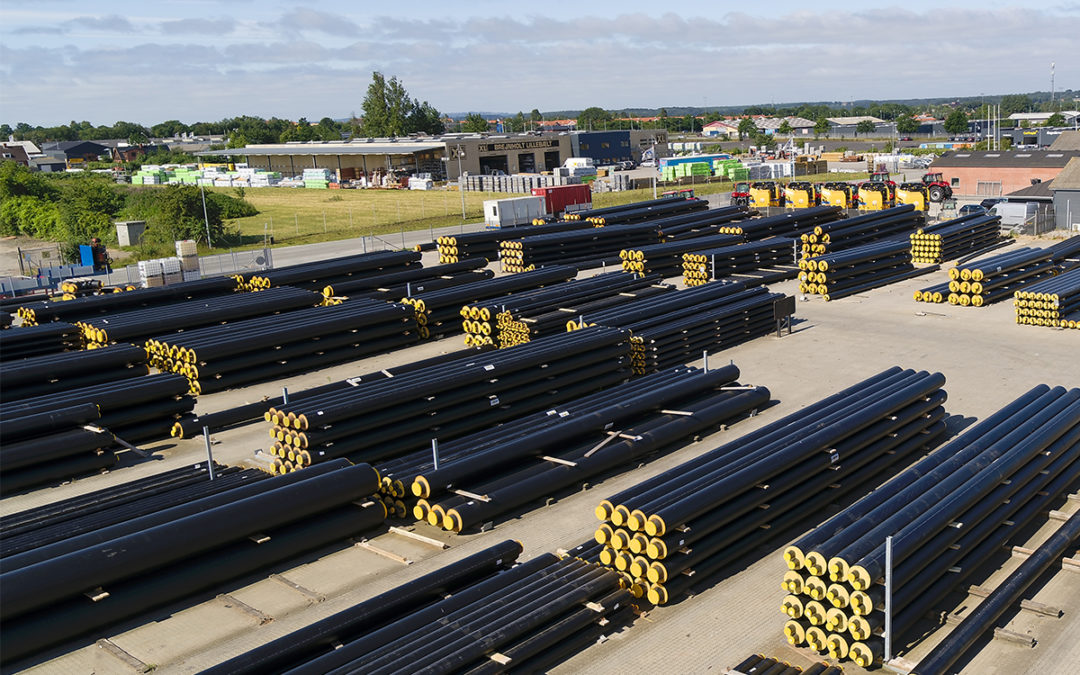 Continual production of preinsulated pipes provides well-known benefits because of the quick and inexpensive production method. But how do continuously produced pipes differ from pipes produced in a traditional way? Get the answer here, where we explore the two production methods in depth, so you will have a better basis for choosing the right solution for your district heating project.

However, in our fully automatic continuous producing plant, we can – in theory – manufacture an infinite pipe strand. For the production of continuously produced bonded pipes, we start placing joints at both ends of the steel pipe, so they can be taken into the machine in a continual process. During the process, the alarm wires will be positioned by a fully automatic machine, while a control panel is constantly ensuring the proper production conditions. The foaming procedure ensures continuous injection of polyurethane foam via foil trays. Thus, the foam liquids can distribute around the steel pipe while the foil – which now acts as a diffusion barrier – encloses the insulation. Finally, the jacket pipe is extruded and the pipes are ready to be marked, cut into lengths, cleaned and checked.

Six metres of pipes are produced every single minute

Because of the fully automatic process, isoplus can produce no less than six metres of pipes every minute. However, when the production of continuously produced pipes is started, we have to accept that the first and the last pipes are unusable. Therefore, a certain number of pipes have to be produced to make the process economical, since it is not possible to stop the production at one end without stopping the entire process. When the production ends, there will therefore always be pipes that are only half finished.

isoplus’ continuously produced pipes are always based on an axial process, though there are also other ways to produce continuously produced pipes. Using such other methods, the foaming is usually carried out by means of a rotary process, where the foam has air contact for a prolonged time, and this reduces the lambda value. Using isoplus’ axial process, the foam is in contact with the air as little as possible, meaning that we avoid unnecessary nitrogen from getting into the foam and thereby reducing the lambda value.

Foaming of continuously produced pipes is a very delicate process and it takes very little to spoil the foaming process. The balance between correct temperature, air pressure and air humidity is subtle. These parameters are vital to the success of the production, but conditions change all the time. Therefore, we must be able to adapt various parameters. The job can only be done by persons with routine and experience. But once you have the required experience, the hard work results in pipes of prime quality.

In general, the insulation in continuously produced pipes has a better lambda value than pipes produced in a traditional manner. The reason is that in a continual process the foam liquids are placed on the foil at the bottom of the pipe, from where it can expand around the pipe and meet at the top of the pipe. This method provides finer foam cells, reducing the heat loss. During traditional production, the foam is thrust several metres into the pipe. To press it to the extreme ends of the pipe, more propellant must be added – propellant reduces the lambda value.

Still, the cells will principally turn spherical when the foam liquid is thrust into the pipe during traditional production. However, during continual production, they turn ovate because the cells will try to grow from the outside. This results in an ovate shape in axial direction to the pipe. Just like we know it from eggs, the short side is slightly weaker than the long side, meaning that we also get a lower compressive strength in radial direction than in axial direction. In practice, this merely means that we cannot install continuously produced pipes at the same depth. Whereas traditionally produced pipes can be installed at a depth of 40m, continuously produced pipes should not be installed at a depth of more than 20m. However, as district heating pipes are usually not installed at a depth of more than a few metres, in practice it has no real impact on safety or lifetime.

The heat loss stays low at all times, thanks to the diffusion barrier

In addition to the improved lambda value achieved in the continual production process, the integrated diffusion barrier also plays a central role when it comes to achieving a lower heat loss – because the diffusion barrier prevents CO2 and cyclopentane from diffusing through the jacket pipe. This way, we can ensure that the good insulating gases remain in the foam, and gases from the outside with poor insulating properties, remain on the outside. This helps ensuring an insulation material with a constantly low lambda value.